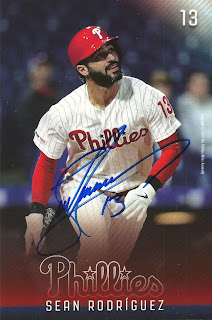 One Sentence Summary:  Sean Rodriguez was the surprising hero in this game, hitting an 11th inning walk-off solo home run to send the Phillies to a 6-5 win.

What It Means:  Somehow, the Phillies are just a game behind the Cubs for the second N.L. Wild Card.

What Happened:  Trailing 4-2, the Phillies took a 5-4 lead in the eighth courtesy of home runs from Bryce Harper (28) and Corey Dickerson (8).  Hector Neris, who had been pitching extremely well, allowed a ninth inning home run to Josh Bell, resulting in the need for extra innings.

Brad Miller had homered (5) earlier in the game.  Jason Vargas turned in a fine pitching performance, allowing just a run through six innings before getting hit around in the seventh. 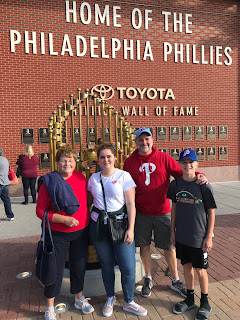 Featured Card:  Rodriguez made some unfortunate comments after the game, criticizing the booing Phillies fans and referring to the fanbase as "entitled."  He's appeared in both team-issued photo card sets this year and I had his second photo card signed at this year's ALS Phestival.

Rodriguez was granted a Topps Now card for his heroics, giving him his first standard-size Phillies baseball card.

Field Report:  Doug and I took my Mom and our cousin Clara to this game.  Clara is visiting the U.S. for the first time from Germany and I wanted to make sure she experienced the sights and sounds of the ballpark.  After a few Tony Luke's cheesesteaks, we took a tour of the ballpark and then settled into our seats to watch a mostly boring game (at least until the later innings).

Before the game, Doug successfully added a Rhys Hoskins autograph to his collection along with another signature from coach Dusty Wathan.

Transactions:  Harper returned from the paternity list and Maikel Franco was sent back down to the IronPigs.
Posted by Jim at 8:00 PM