One Sentence Summary:  Capped by Bryce Harper's walk-off grand slam, the Phillies scored six runs in the ninth to complete an improbable comeback win against the Cubs.

What It Means:  The sweep of the Cubs completed, the Phillies now open a weekend series against the Padres.  The Phillies are a game behind the Cubs for the second Wild Card.

And the last time the Phillies had a walk-off grand slam while trailing was on September 2, 1983, when Ozzie Virgil did it with Bob Dernier, Ivan DeJesus and Garry Maddox on base.  (Tweet from Tyler Kepner.)

What Happened:  Trailing 5-1, Jean Segura flied out to start the bottom of the ninth.  Cesar Hernandez reached on an error, followed by singles from Scott Kingery and then pinch-hitter Brad Miller, scoring Hernandez.  Roman Quinn's single made it 5-3, and Rhys Hoskins was drilled in the hand to load the bases for Harper.  With Derek Holland replacing Pedro Strop on the mound, Harper crushed a 2-2 pitch to right with the ball landing in the second deck.  Broadcaster John Kruk summed it up best with his "Oh my God" exclamation as the ball left the ballpark.

After finishing his mad dash around the basepaths, Harper was mobbed by his teammates at home plate.  Before leaving the field, he found and aggressively hugged hitting coach Charlie Manuel.

Featured Card:  Harper receives a season highlight card in the ever expanding 2019 Chachi set.  And I couldn't decide on a main image, so I decided to make the second card below a rare, short-printed image variation. 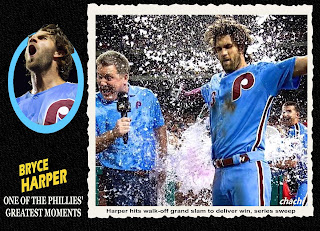