What It Means:  The Phillies are two games behind the Cardinals for the second wild card spot.

What Happened:  Roman Quinn also had two hits, including an RBI triple in the eighth.  Jason Vargas held the Cubs to two runs over six innings and then three relievers - Blake Parker, Mike Morin and Hector Neris - shut down the Cubs over the final three frames.  Neris recorded his 21st save.

Featured Card:  This is Realmuto's card from the Stadium Club set, released in late June. 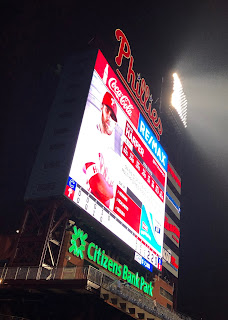 Field Report:  We returned from San Francisco on Monday night after watching three of the four Phillies games against the Giants.  So on Tuesday, starved for baseball, we headed back to the ballpark.  Truth be told, we had tickets for Tuesday night's game since March, and given the weather forecast I would have preferred to have stayed home and rested.

Nevertheless, we persisted through the steady rain and enjoyed the Phillies play like a team with a new hitting coach.  Doug added pre-game autographs from both bullpen catchers, Bob Stumpo and Craig Driver, coaches Rob Thomson and Paco Figueroa and manager Gabe Kapler.  Brad Miller was the only player who signed for him.

Transactions:  In an unexpected but not that surprising move, the Phillies fired hitting coach John Mallee on Tuesday afternoon.  In a much more surprising move, Charlie Manuel (!), the franchise's all-time most winningest manager, was hired to replace him.  Manuel will be part of Gabe Kapler's coaching staff for the remainder of the 2019 season.