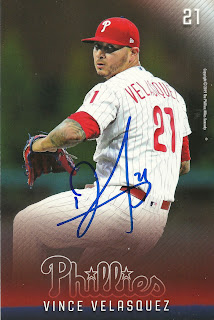 One Sentence Summary:  Vince Velasquez pitched seven strong innings and the Phillies offense banged out 13 hits in this 7-3 win in Phoenix.

What It Means:  The Phillies and Nationals currently occupy the two Wild Card spots in the National League.  The surging Mets, 9-1 in their last 10 games, are only 2 1/2 games back of both teams.

What Happened:  Velasquez has a 2.04 ERA over his past three starts, and he allowed two runs on six hits in this game.  Scott Kingery started the scoring for the Phillies in the second with a solo home run (14).  J.T. Realmuto later added an RBI double and Jean Segura had two RBI singles.

Featured Card:  I have five baseball cards for Velasquez this year, including this photo card signed at the annual ALS Phestival.  I've now featured three of those five cards, and if Velasquez keeps pitching this way I'll hopefully post the last two in future game summary posts.
Posted by Jim at 10:00 PM

Email ThisBlogThis!Share to TwitterShare to FacebookShare to Pinterest
Labels: 2019, Velasquez