Another Package from Alan: Searching for Freddie Andrews 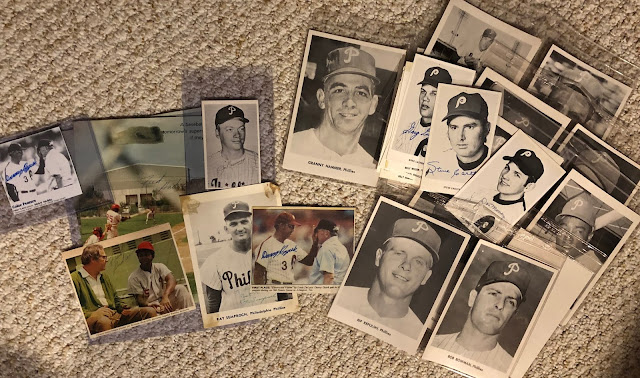 A few weeks back, I featured the first Phillies baseball card for Larry File as fellow collector Alan had been kind enough to send me a care package of autographed Phillies photos, including the rare photo of File used for my card.  Since then, Alan has been busy putting together a second care package, with even more autographed Phillies photos along with cards from various 1960s Phillies picture packs and a hard to find 1967 Phillies Safe Driving Jim Bunning card.

It's a blast to get a package like this in the mail, and with a busy week at work I wanted to wait until the weekend to take the time and enjoy each item Alan sent.

There were 21 different cards from various 5 x 7 Phillies picture pack sets in the package, and an extra card signed by Ray Semproch.  Sorting through the cards, I realized I had complete sets of the 1961 Jay Publishing picture pack (12 cards) along with 9 of the 12 cards from the 1958 Jay Publishing set.  The autographed Semproch photo is from the 1959 set.  I've been slowly adding these picture pack Phillies issues from the '50s and '60s and it's probably time for me to put together a true want list of what I still need to track down. 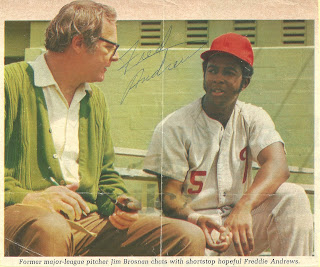 There was also a few version of a cool photo of former Phillies manager Danny Ozark, both signed, and taken during an Old-Timers Game at some point in the late 1980s in Arlington.

But the few pieces that puzzled me were the signed photos of short-time former Phillie Freddie Andrews, apparently clipped from a magazine article.  Andrews appeared in 16 games for the 1976 and 1977 Phillies, and his sole Phillies baseball card can be found within the 1977 team-issued photo card set.  I wanted to figure out the source of these signed magazine pages sent by Alan.  I came up empty while searching the Sports Illustrated online archive, and I searched every possible combination of words and names found within the article on the back of the pages but I still couldn't identify the source.

I finally Googled this sentence from the article, "In the spring of '72 Freddie Andrews learned to hate the Continuous Motion Program," and I immediately got a hit for the March 1974 issue of Boys' Life magazine.  Andrews was featured on the cover of that issue, and I'd recommend reading the entire article which I've linked here.  The article is written by former big leauge pitcher Jim Brosnan and it recounts a spring day in March 1973 on a minor league field at the Carpenter Complex in Clearwater, Florida, along with Andrews' rise through the Phillies farm system.  The article is dotted with names every Phillies fan will recognize, including farm director Dallas Green, general manager Paul Owens, Reading Phillies manager Bunning and coaches Wally Moses and Ruben Amaro. 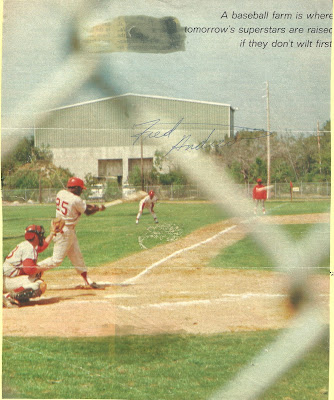 Alan sent two copies of page 9 of the magazine along with the cover photo from page 8, with all three pages signed by Andrews.  Andrews would spend the entire 1973 season with the Reading Phillies team, where he'd hit .227 over 110 games.  He'd bounce back with a successful 1974 season, earning him a promotion to Triple-A Toledo.  And while he wasn't with the Phillies for long, I'm happy to add these pieces to my 1970s Phillies binder.