This a crossover post from my other blog, chronicling each card in the wonderful 1956 Topps set. Today's post features former Phillies manager Mayo Smith.  Please click on over there for all of the posts to date, including a look at all the Phillies Alumni featured in the set.

Mayo Smith spent almost four decades in organized baseball, first as an outfielder in the Tigers, Reds, Athletics and Yankees system between 1933 and 1952, and then as a manager for the Phillies, Reds and Tigers between 1955 and 1970.

Smith's sole year as a player in the big leagues came in 1945 when he hit .212 over 73 games for the Athletics.  He was named the manager of the Phillies in October 1954 at the age of 39, replacing the outgoing Terry Moore.  The Phillies never finished above fourth place in his 3 1/2 years at the helm, and he was fired in mid-1958.  Smith briefly managed the 1959 Reds before getting fired again mid-season.

He found his most success as manager of the Tigers for four seasons, leading the Tigers to a World Series title in 1968.  The Cardinals had taken a commanding three games to one lead in that series, but the Tigers won three in a row to take the title.  Smith was named A.L. Manager of the Year in 1968 and would manage the Tigers for two more seasons.  He was fired following the 1970 season and replaced by Billy Martin (#181), having gone 363-285.  After a single season as a scout for the Oakland Athletics in 1971, Smith officially retired from baseball.

Building the Set
October 1, 1987 in Bridgeton, NJ - Card #49
My notes indicate we bought this card at Hummel's in Bridgeton, NJ a few days before my 14th birthday.  We acquired three Phillies card that day - Smith, Murry Dickson (#211) and Frank Baumholtz (#274) and I don't know how much we paid for the trio.  My memories of Hummel's are hazy at best, but I seem to recall it was a large building with a sprawling liquor store on the first floor and a baseball card shop on the second floor.  With baseball card stores booming in the mid to late 1980s, we'd often take a ride to one of the four or five local card shops we were lucky enough to have near us.  October 1st was a Thursday, so it's strange to me that we would have made the 20 minute or so drive to Hummel's on a week night after work and school.  My approaching birthday might have contributed to the motivation for the trip.

I tried to find Hummel's on Google Maps and sure enough a liquor store came up, but not the one I remember.  I remember a bigger builder, with the second floor, and this clearly isn't it.

The Card
We're through 60 cards in the set, and Smith is only the second Phillies card to appear.  All other teams have had at least three cards up to this point, with the Athletics and Pirates leading the way with five cards each.  Mayo is the first of four subjects in the set with the last name of Smith with two Hals (#62 and #283) and an Al (#105) coming up.

I can only assume the photographer asked Smith to give his best "get down and slide" sign for the pose found here.  And kudos to the artist responsible for the back three panels of this card, as there clearly wasn't a lot of material with which to work.  While the back also indicates Smith was a lefty, his Baseball Reference page indicates he threw right-handed.

Smith is one of only two manager cards featured in the 1956 set, along with Walter Alston (#8).  I've always been curious as to why Smith was chosen as a subject along with the well-known (and successful) Alston instead of any other Major League manager.  Here's a list of all the managers who could have had cards in the 1956 set, in order of each team's finish from the 1955 season.  No offense to Smith, but there's a few better candidates than him in this list: 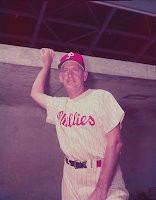 1956 Season
Returning for his second season as manager of the Phillies, Smith guided the team to a 71-83 record and a fifth place finish in the National League.  The team performed well for most of the season, climbing to just one game under .500 as late as August 8th.  Despite the rough year, Smith was given a one year extension following the season and he'd hang on to manage through all of 1957 and half of the 1958 season.

Phillies Career
Smith's record as Phillies manager was 264-282-2, and his best season came in 1957 when the Phillies battled at the top of the division until mid-July.  That team finished that season right at .500 with a 77-77 record.  The play was much of the same at the start of the 1958 season, and the Phillies reached a winning record on July 12th at 39-38.  However, the team lost eight of their next nine games and Smith was fired on July 22nd.  Whiz Kids manager Eddie Sawyer was brought back to replace Smith, his second managerial stint with the club.

Smith received two mainstream baseball cards to mark his time with the Phillies, in the 1955 and 1956 Topps sets.  He also appears in the 1956, 1957 and 1958 Jay Publishing Phillies sets, as well as in the oddball 1956 Topps Pins and 1956 Topps Hocus Focus sets.  He's also in the rare 1955 Felin's Franks Match the Phillies set, which according to my edition of the Standard Catalog of Vintage Baseball Cards, may not have actually been released.

26 - Smith non-parallel baseball cards in the Beckett online database as of 8/3/19.

There are only two managers in the 56T set? Very weird. You'd think that if they'd only pick two... that they'd use the 1955 World Series participants. With Alston already on the checklist... they just needed Stengel.