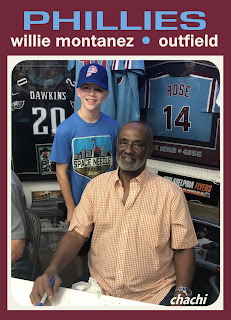 One Sentence Summary:  The Pirates, wearing throwback monochrome black uniforms to celebrate their 1979 team, held the Phillies offense to three singles in this 5-1 loss.

What It Means:  The Phillies have not won three in a row since the end of June.

Featured Card:  Doug and I made the trip to Havertown on Saturday afternoon to Carl's Cards & Collectibles as Phillies greats Willie Montanez and Greg Luzinski were appearing to sign autographs.  Full disclosure here, I was more interested in meeting Montanez than Doug was but he agreed to make the trip with me and he was a good sport posing for a picture with the former outfielder.

Transactions:  On Saturday morning, the Phillies acquired right-handed reliever Mike Morin from the Minnesota Twins for cash considerations.  Morin will hopefully provide some much-needed bullpen depth.  With the Twins this season, he had appeared in 23 games and pitched to a 3.18 ERA.  He's appeared in 209 games over his six-year career with the Angels, Royals, Mariners and Twins, owning a 10-8 record and a 4.48 career ERA.

JD Hammer was sent back down to the IronPigs to make room for Morin and Seranthony Dominguez was moved to the 60-day injured list.

loved willie the phillie, had to be one of the biggest hot dogs of all time. latins have fun playing the game, and willie had game, was pissed when he was traded to s f for garry maddox, gotta admit we got the best of that deal.