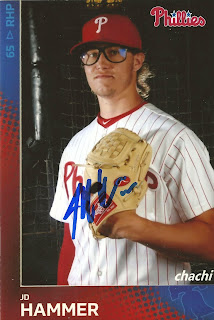 One Sentence Summary:  The Phillies lost a game that ended around 1:45 in the morning after a two and half hour rain delay.

What It Means:  I made it to the sixth inning after the Phillies had tied the score at two and then I went to bed, figuring I should quit while I was ahead (or at least tied).

What Happened:  The Phillies pitchers walked 10 Dodgers batters, four of those walks coming from Nick Pivetta in his rain-shortened 2 1/3 inning outing.  On the bright side, Pivetta didn't allow a hit.  Edgar Garcia, Juan Nicasio and Austin Davis couldn't keep the Dodgers off the board in the later innings, with those three relievers giving up six runs in their four innings of work.

Featured Card:  JD Hammer entered the game after the lengthy rain delay and pitched 1 2/3 scoreless innings.  He grounded out to first in his first professional baseball plate appearance in the third.  This is the self-created photo card I had Hammer sign this past weekend at his Deptford Mall appearance.

Transactions:  Jay Bruce became the tenth player currently on the injured list for the Phillies, landing there with a right oblique strain.  Nick Williams was recalled from Lehigh Valley.
Posted by Jim at 7:00 PM