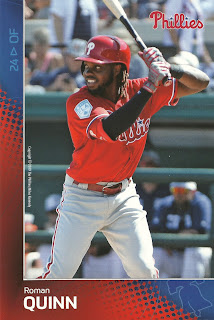 One Sentence Summary:  The Dodgers demolished the hapless Phillies, 16-2.

What It Means:  This was an embarrassing loss.  Mid-game, Matt Gelb Tweeted, "The Phillies are getting pantsed by the best team in the National League."

What Happened:  This was bad, and the most painful part of the loss was the fourth inning in which the Dodgers scored six runs and out-hustled the Phillies.  After the inning was over, half the Phillies on the field didn't realize the out just recorded was the third out, lingering on the field.  Cody Bellinger homered twice and went 4 for 6.  Zach Eflin was hung out for six innings, ultimately allowing seven runs.  Yacksel Rios allowed four runs without retiring a batter.  The Phillies offense went 0 for 9 with runners in scoring position.

Featured Card:  Outfielder Roman Quinn recorded the final four outs for the Phillies, and gave up two runs on four hits in the process.  He struck out Casey Sadler looking.  Quinn is the third position player to pitch for the Phillies this season, joining Aaron Altherr and Sean Rodriguez.
Posted by Jim at 8:30 PM

Email ThisBlogThis!Share to TwitterShare to FacebookShare to Pinterest
Labels: 2019, Quinn