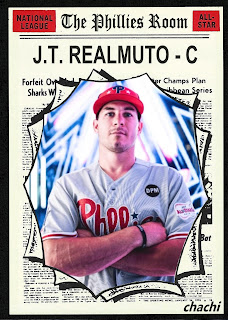 One Sentence Summary:  The A.L. squeaked by the N.L. for their seventh straight win as Michael Brantley and Joey Gallo provided the big hits for the junior circuit.

What It Means:  I'm getting old.  For the first time in recent memory, I didn't watch the entire game.  I honestly don't know most of the players anymore (especially from the American League) and I was annoyed with the the in-game interviews with players while they were either at bat or in the field.  I just want to watch and enjoy the game.  Still, we enjoyed the first six innings as a family before calling it a night and checking on the final result on Wednesday morning.

What Happened:  There wasn't a whole lot of offense in the game with only Charlie Blackmon and Gallo homering.  No player had more than one hit.  Pete Alonso drove in two eighth inning runs with a single.  Clayton Kershaw was tagged with the loss, having allowed Brantley's RBI-double in the second that put the A.L. up for good.  Indians' pitcher Shane Bieber was the surprise MVP choice, earned by striking out the side in the fifth (Willson Contreras, Ketel Marte and Ronald Acuna, Jr.) in front of his hometown fans.

Featured Card:  J.T. Realmuto was the sole Phillies representative, and the last time the Phillies had more than one player named to an All-Star team was 2013 when both Cliff Lee and Domonic Brown made the squad.  Realmuto pinch-hit for starting DH Josh Bell in the seventh, popping up against Shane Greene.  Remaining in the game as the DH, he was the first of three batters struck out by Aroldis Chapman in the ninth to give the A.L. the win.

Realmuto's Phillies batting helmets apparently didn't make it to Cleveland and was seen on deck sporting a Brewers helmet in the top of the sixth.  He then found a Phillies sticker and put it on a Cardinals helmet for his actual two at-bats.

Because of that, by the way, Brown's father, who was seemingly also his manager, demanded a lot more from Carl's Cards, in Havertown, for his scheduled signing and then cancelled the event (https://www.crossingbroad.com/2013/07/dom-browns-father-seems-to-have-irked-one-local-card-shop.html).

That actually saved a lot of people from turning unsigned $20 Rawlings official MLB baseballs into $10 Dom Brown-signed baseballs, so it wasn't entirely bad news in the long run.

Wow! I had never heard that Dom Brown story.

I wish I had known about Carl's Cards sooner. It's a bit of a hike for us, but well worth the trip based on the number of autograph appearances they schedule.