One Sentence Summary:  Behind a Maikel Franco two-run home run in the sixth, the Phillies came from behind to win this ballgame, 7-5.

What It Means:  Franco hit his second home run in as many days, as the Phillies rode a five-run sixth inning to their second win in a row.  Postgame, the players continued to give some credit to the lucky bamboo plant Brad Miller had brought into the clubhouse.  Some of that mojo rubbed off on Miller, who followed Franco's blast with a pinch-hit home run of his own, his first as a Phillie.

What Happened:  Scott Kingery led off the game with a home run (10) and Rhys Hoskins also homered (18) in the third.  Jake Arrieta had a mediocre outing, giving up five runs on nine hits in his six innings of work.  Hector Neris recorded the final four outs of the game for his 16th save.

Featured Card:  Franco gets the card for the second game in a row.

The Phillies Room will be taking a short summer break, and semi-regular posting will return shortly.  May the lucky bamboo continue to bring the team victories. 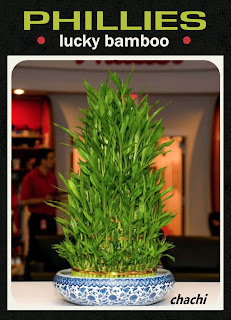