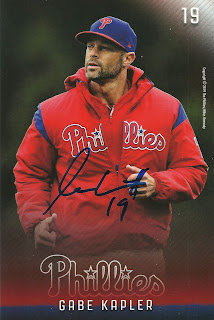 One Sentence Summary:  The bullpen squandered another lead and the offense stayed quiet in this latest loss to the Marlins.

What It Means:  As a lifelong Phillies fan, I'm used to these periods of absolutely horrendous play from the team.  The fact that I'm used to it by now still doesn't make it any easier once we're in the midst of one of these runs.  I find myself telling people that I "need a break" from the Phillies and fortunately with a scheduled vacation coming up, I'll get that break.

In three weeks, the Phillies went from having a two game lead on the Braves in the division to being 5 1/2 games back.  That's a lot of bad baseball to endure.

What Happened:  Bryce Harper (13) and Rhys Hoskins (16) hit back-to-back home runs in the third and Harper singled home another run in the fifth to give the Phillies a 3-1 lead.  The Marlins scored four unanswered runs in the seventh and eighth off relievers Adam Morgan and JD Hammer.

Featured Card:  In the fourth inning, Gabe Kapler was ejected for the first time in his managerial career, arguing a checked swing third strike by Scott Kingery.  F bombs were dropped, dirt was kicked, but it still didn't energize an all but lifeless team.  Kapler was in a much better mood when he signed this card for me at the recent Phillies Phestival.
Posted by Jim at 8:00 PM