One Sentence Summary:  Leading by a score of 7-2 heading to the bottom of the seventh, the Phillies bullpen allowed seven Braves runs in the final three innings, losing the game in horrendously painful fashion, 9-8.

What It Means:  So much for a series sweep.

What Happened:  Everything was right with the world as the Phillies had home runs from Bryce Harper (12), Scott Kingery (8) and Rhys Hoskins (15).  Nick Pivetta was on the mound and cruising towards a victory and then everything fell apart.  Brian McCann did the most late damage, homering in the seventh and then hitting the bloop single in the ninth that would score the tying and winning runs.

Hector Neris had been fairly dependable so far this season, but he could only retire two batters in the ninth before the Braves scored the three runs they needed to win the game.

Transactions:  On Thursday afternoon, the Phillies acquired utilityman Brad Miller from the Yankees for cash considerations and he was activated prior to this game.  I'm not that familiar with Miller and looking at his career statistics, I was surprised to see he had hit 30 home runs for the Rays in 2016.  He's a career .240 hitter over seven seasons with the Mariners, Rays, Brewers and Indians.

Miller appeared in a decent amount of 2018 baseball card releases, but it doesn't look as if he's made it into any 2019 sets yet. 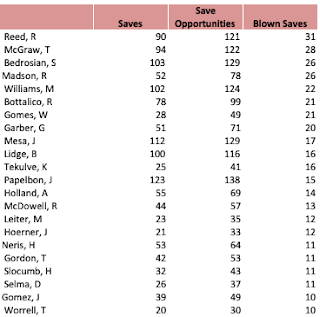