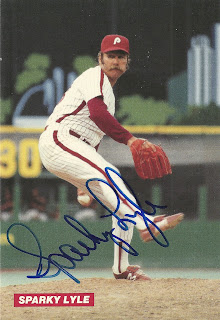 One Sentence Summary:  A solid performance from Zach Eflin was wasted as the Phillies offense couldn't solve D-Backs starting pitcher Merrill Kelly in this 2-0 loss.

What It Means:  The Phillies are now back in second place for the first time since April 25th.  After a Thursday off day, they'll head to Atlanta for a crucial three-game weekend series.

What Happened:  Eflin went eight innings, allowing two runs on five hits while striking out nine.  The offense managed three hits, two coming from Nick Williams who was starting in place of Bryce Harper.  Harper was not in the starting line-up for the first time this season.

Featured Card:  I spent Wednesday evening getting ready for the annual ALS Phillies Phestival, to be held on Thursday afternoon.  This is only the third year we've attended this event, which results in my now annual refrain to Jenna of, "I can't believe we didn't start going to this sooner."  It's a fantastic event, resulting in a great haul of autographs and most importantly raising money in the fight against ALS.

Since the Phestival began, 35 years ago, the Phillies have had a habit of producing special photo cards for players, alumni or guests in attendance who wouldn't otherwise have a photo card available.  Some of these cards have become my personal white whales, resulting in eBay saved searches for "Yorkis Perez Phillies" or even just "Phestival."

This Sparky Lyle card was made available at the 1992 event, and I'll be on the hunt for any new cards produced this year.  Candidates this year for an ALS Phillies Phestival exclusive card are:
Transactions:  Edubray Ramos returned from the Injured List, where he had been since mid-May.  Austin Davis took the shuttle back to Lehigh Valley.
Posted by Jim at 3:30 PM

Email ThisBlogThis!Share to TwitterShare to FacebookShare to Pinterest
Labels: 1992, Lyle