One Sentence Summary:  The two teams combined to hit a Major League record 13 home runs as the Diamondbacks outslugged the Phillies, 13-8.

What It Means:  This loss and a Braves win dropped the Phillies into a tie for first place, the first time they've not held sole possession of the top spot since April 25th.

What Happened:  Jerad Eickhoff bore the brunt of the barrage, allowing back-to-back-to-back home runs to start the game, and five home runs overall in his three innings of work.  Contributing to the record breaking game were Jarrod Dyson, Ketel Marte, David Peralta, Eduardo Escobar (2), Alex Avila and Ildemaro Vargas (2) from the Diamondbacks and Jean Segura, Scott Kingery (2), Rhys Hoskins and Jay Bruce for the Phillies.

Featured Card:  The red hot Kingery gets the featured card, as he went 3 for 5 with a triple and two home runs. 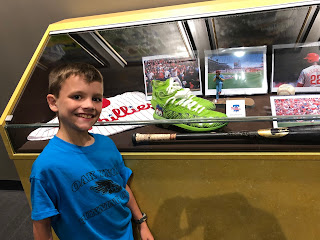 Field Report:  We were there as I received four complimentary tickets in the Hall of Fame Club for group leader appreciation night.  The comforts of the HOF Club came in handy during the steady rain that fell throughout the first part of the game.  In our travels to find his water ice flavor of choice (cotton candy), Ben and I found Bryce Harper's Phanatic inspired cleats from opening day.

Transaction:  Triple-A pitcher Tom Eshelman was traded to the Orioles for international signing bonus money.  Eshelman and Vince Velasquez were the final two players remaining from the original group of five acquired from the Astros for Ken Giles in December 2015.

Eshelman won the Paul Owens award in 2017 as the best pitcher in the Phillies farm system and in three-plus seasons in the Phillies system, he appeared in 84 games, compiling a 25-27 record.
Posted by Jim at 8:30 PM