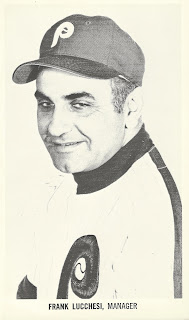 One Sentence Summary:  A three-run seventh inning by the Reds doomed the Phillies in this 4-3 loss.

What It Means:  They weren't able to complete the sweep and the Diamondbacks come to town next for a three-game series beginning Monday night.  The Braves won their game in 12 innings against the Marlins, drawing to within a game of the Phillies.

What Happened:  Holding onto a 3-1 lead, the wheels came off for the Phillies with two outs in the seventh.  Aaron Nola allowed a single and a walk before yielding to Jose Alvarez who promptly allowed another hit and then a two-run single to Joey Votto to tie the game.  Vince Velasquez entered and gave up another hit as the Reds took the lead for good.

The first two Phillies runs scored when Votto misplayed a Rhys Hoskins pop-up, allowing a pair of runs to score.  Bryce Harper was the second run to score on that play, coming into home with an aggressive slide.  Harper's aggressiveness would hurt him in the fifth when he was caught stealing home with Hoskins at the plate.

Featured Card:  It was announced during the game that former Phillies manager Frank Lucchesi passed away on Saturday at the age of 92.  Lucchesi was 166-233 as the team's manager from 1970 until being dismissed part way through the 1972 season.  He managed the last Phillies game at Connie Mack Stadium and the first Phillies game at Veterans Stadium. 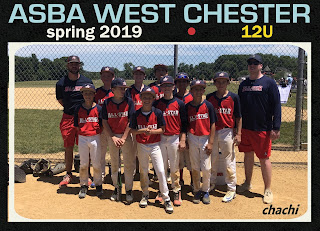 Field Report:  As this game was starting, my son Doug and his baseball team were playing the last game of their spring season.  It was a growing year for both him and the team and he was proudest of playing every position except catcher throughout the season.  He was fourth on the team in hits, and from a pitching perspective he was third on the team in strikeouts.  He didn't commit an error in the field the entire season, playing all but one inning of every game.  I'm proud of him and his team!
Posted by Jim at 7:00 AM