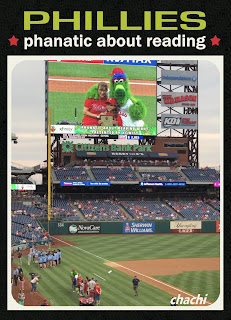 One Sentence Summary:  Jay Bruce continued his red hot hitting streak as the Phillies held on to defeat the Reds, 4-2.

What It Means:  Bruce hit a two-run home run (18) in the fifth inning, giving the Phillies a 2-1 lead.  He became the first Phillies player to hit four home runs in his first four games for the team, earning him instant adoration from the fanbase and his second Topps Now card.

What Happened:  Zach Eflin departed after 6 1/3 innings, handing the ball over to Jose Alvarez, new set-up man Vince Velasquez and closer Hector Neris, who each kept the Reds off the board.  Eflin settled down and had a good outing after allowing a first inning home run to Joey Votto. 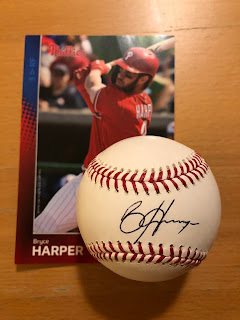 Featured Card/Field Report:  Jenna and her student Zoe were part of a pregame ceremony in which a group of students were honored as part of the Phanatic About Reading night.  I thought the achievement deserved its own commemorative card and it was a proud moment for Jenna and one of her favorite students.  As his mother was down on the field, Doug was collecting autographs from Edgar Garcia and third base coach Dusty Wathan.

It was also Bark at the Park night and there were mystery grab bags for sale to benefit the SPCA with each grab bag containing an autographed baseball.  I purchased two bags and was somewhat disappointed to get signed baseballs for Jerad Eickhoff and Neris.  An older couple had just opened their bag and they were disappointed as well, as they had received . . . Bryce Harper.  They seemed bummed I had scored balls for Eickhoff and Neris, so I offered to make a two for one trade for their Harper ball.  They accepted my proposal without hesitation.

And that's how I ended up with an autographed Harper baseball.  Not too shabby!

Transactions:  Seranthony Dominguez became the latest reliever to join the Injured List with a right elbow injury, and he may miss some significant time.  Eflin was activated from the IL to make this start.  Yacksel Rios was sent back down and Ranger Suarez joined the team as a fresh arm out of the bullpen.
Posted by Jim at 5:30 PM

lol... I thought it was "Reading", as in the fifth-largest city in Philadelphia... I was thinking "That doesn't look like First Energy Stadium".

I guess I'm the opposite of all those Monopoly players who take a ride on the "Reed-ing" Railroad. :-D

Disappointed by a Harper baseball? I don't even know how to process that.