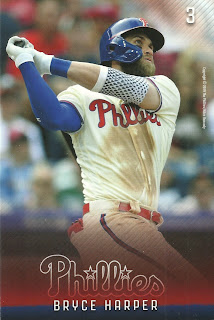 One Sentence Summary:  The offense came through in support of Aaron Nola's fine outing, pounding the Cardinals 11-4.

What It Means:  For the second night in a row, both teams had to wait out a lengthy (and occasionally scary) rain delay with this game starting around 8:40.  The Phillies will go for the series sweep in a Thursday afternoon matinee.

What Happened:  Nola (6-0) allowed four hits and a run in his seven innings of work, striking out eight.  JD Hammer closed out the lopsided game with a perfect ninth inning.

Featured Card:  Harper and Nola are this team's two best players, and if they get (and stay) hot, it could make for a fun summer.  Harper's card is front and center within the packaging for the new team-issued photo card set, detailed in this post.

Transactions:  Adam Morgan became the latest Injured List casualty, landing on the list with a left forearm strain.  Yacksel Rios joined the bullpen in his place.
Posted by Jim at 7:00 PM

Email ThisBlogThis!Share to TwitterShare to FacebookShare to Pinterest
Labels: 2019, Harper

That might be the coolest Phillies photocard I have ever seen! Very atypical for the set.