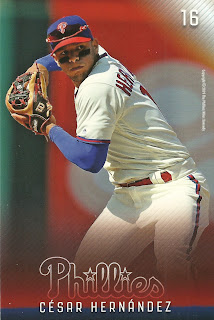 One Sentence Summary:  Nick Pivetta settled down after a rough first inning and the bullpen threw four shutout innings in this 4-3 win.

What It Means:  The game began after a 50 minute delay and was played through rain on and off throughout the evening.

What Happened:  Pivetta allowed a pair of first inning home runs and dug himself a 3-0 deficit.  The Phillies came back thanks to a pair of doubles from Bryce Harper and a two-run home run (6) from Cesar Hernandez in the fourth.  Hector Neris secured his 12th save.

Featured Card:  The Phillies began selling their second team-issued photo card set of the season on Tuesday night and I'll have a full post on this new set and its checklist soon.

Field Report:  We were there . . . briefly.  Having purchased some standing room only tickets and exchanged a few tickets to an upcoming game we couldn't attend, we justified our early departure given that this was a "bonus" game for us.  We were there long enough to pick up the new team-issued photo card sets and to enjoy the pre-game ceremony, saluting military veterans.  Doug came away empty handed in terms of autographs as no one was signing prior to the game. Transactions:  On Monday night, Odubel Herrera was arrested in Atlantic City after allegedly assaulting his girlfriend.  He was placed on the team's restricted list and MLB will begin the task of determining the length and severity of his punishment.  It's unclear when or if Herrera will return to the Phillies.

Nick Williams took Herrera's place on the active roster.  Enyel De Los Santos was sent to Lehigh Valley to make room for Pivetta.
Posted by Jim at 7:00 AM