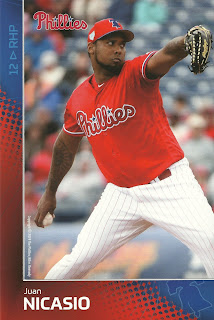 One Sentence Summary:  With most of the bullpen unavailable due to scheduled days off, Juan Nicasio couldn't hold off the Cubs in this frustrating 3-2 loss.

What It Means:  Manager Gabe Kapler defended his bullpen usage after the game, explaining that Hector Neris, Seranthony Dominguez, Pat Neshek and Adam Morgan were unavailable due to their recent work load.  As a result of this and Nicasio's ineffectiveness, the game was lost.

What Happened:  The Phillies took a 2-1 lead in the seventh on a two-run single from Andrew McCutchen.  Nicasio loaded the bases in the ninth, walked two and allowed two hits, including the game-winner from Javier Baez.

The blown save ruined a good outing from Zach Eflin, who battled through six innings and allowed a run on six hits.

Featured Card:  This is Nicasio's second stint with the Phillies, and his first time around lasted only two games back in 2017.  His first (and to date only) Phillies baseball card can be found within this year's team-issued photo card set.
Posted by Jim at 7:00 AM

Email ThisBlogThis!Share to TwitterShare to FacebookShare to Pinterest
Labels: 2019, Nicasio