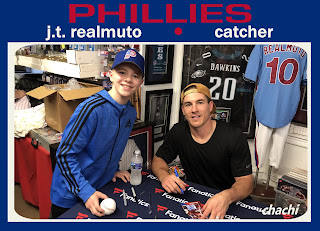 One Sentence Summary:  No Phillies pitcher was safe in this 11-3 decisive win by the Brewers.

What It Means:  The Phillies lost a series, their first series loss since late April against the Mets, and they'll try to regain their winning ways with a three-game weekend set against the Rockies at home.

What Happened:  Zach Eflin (5-4) gave up four runs on seven hits in five innings.  Four relievers then combined to allow seven more runs over the remaining four innings.  Other than a Jean Segura home run (4) in the first inning, Brewers starter Zach Davies had an easy outing.  The offense had just three more hits after Segura's homer.

Featured Card:  After this dismantling by the Brewers, J.T. Realmuto spent his off night signing autographs in Havertown at Carl's Cards & Collectibles.  (Scott Kingery was originally slated to appear as well, but his rehab assignment in Reading preempted his appearance.)  Doug and I made the trip west and stood in an impressively long line to get our Realmuto autographs.

I had his first Phillies team-issued photo card signed while Doug opted to get his signature on a ball previously autographed by Carlos Ruiz.  I told Realmuto that was my son's ball for recent Phillies World Series catchers and the current Phillies catcher gave a slight smile.  "No pressure," I added.  He was kind enough to pose for a quick picture with Doug, and Doug's new Ruiz/Realmuto signed baseball now shares the top spot in his autographed ball collection with his Mike Trout signed baseball.
Posted by Jim at 8:00 AM

Hopefully the World Series connection works out, and then you can add Boone to it as well. Alas, they need to win though, because no Phillies World Series losing catchers have survived (Dutch, Bo Diaz, Seminick/Lopata, or Bill Killefer (I had to look that one up).

His goal is to hopefully track down Boone for the ball at Alumni Weekend!