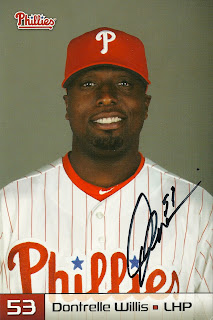 One Sentence Summary:  By all accounts a sloppy game, the Phillies lost 5-2 to the Brewers as Jake Arrieta's and Bryce Harper's struggles continued.

What It Means:  The Phillies will go for the series split in Thursday's matinee.

What Happened:  Misplays by Cesar Hernandez and Sean Rodriguez in the third led to a three-run inning from the Brewers.  Arrieta had walked pitcher Gio Gonzalez to start the inning.  A fifth Brewers run scored in the fifth when Andrew McCutchen dropped a fly ball.

Featured Card:  The current Phillies aren't giving me much to work with here, so this game's featured card is a bit of a stretch.  Actor Bruce Willis threw out the ceremonial first pitch prior to this game, and then it was decidedly downhill from there.  With the way my brain works, Bruce Willis made me think of Dontrelle Willis, who spent about three months in the Phillies organization between December 2011 and his release during spring training in March 2012.  The Phillies issued a photo card for Willis, assuming he'd make the team and be a popular target for autograph seekers.  It didn't work out for him with the Phils, but at least we have some cardboard proof of the D-Train's short time in red pinstripes.
Posted by Jim at 7:00 PM

Email ThisBlogThis!Share to TwitterShare to FacebookShare to Pinterest
Labels: 2011, Willis