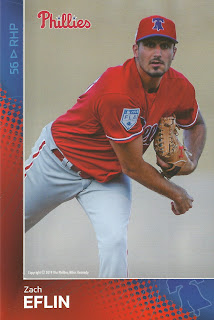 One Sentence Summary:  Zach Eflin was in total control, pitching a complete game shutout against the Royals in this 7-0 win.

What Happened:  Eflin (5-3) needed 110 pitches for his gem and he allowed four hits while striking out seven.  He didn't walk a batter.  Everyone in the line-up except catcher Andrew Knapp collected a hit.  There were no home runs, but a lot of constructive outs and clutch hits.  Rhys Hoskins started the scoring in the third with a two-run, two-out single.

Featured Card:  Eflin should get more baseball card attention if he keeps pitching like this.  Here's his team-issued photo card set, still available for sale at the ballpark.

Transactions:  Vince Velasquez landed on the Injured List with a forearm strain and Austin Davis was recalled to take his place on the roster.
Posted by Jim at 12:30 PM

Email ThisBlogThis!Share to TwitterShare to FacebookShare to Pinterest
Labels: 2019, Eflin