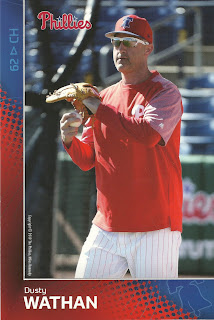 One Sentence Summary:  Jake Arrieta was tagged for three home runs in his five-inning outing and the Phillies couldn't muster any offense against Royals pitching, dropping this game 5-1.

What It Means:  The Phillies have lost seven of their last eight series openers, only to go 11-4 in the other games.  (Per Corey Seidman Tweet.)

What Happened:  The offense had four hits and went 0 for 8 with runners in scoring position.  In his last four starts, Arrieta is 1-3 with a 5.73 ERA and has allowed five home runs in 22 innings pitched.

Featured Card:  This game marked coach Dusty Wathan's first return to Kansas City since he appeared in three games for the Royals in late September 2002.  Wathan's father is long-time Royals catcher and manager John Wathan, and it's been great reading and listening to both father and son's recollections of their memories together in Kansas City.

Dusty Wathan has been in the Phillies organization since 2006.  He started as a player in their minor league system in 2006 and 2007 and then served ten seasons as a minor league manager.  He's been Gabe Kapler's third base coach the past two seasons.

Email ThisBlogThis!Share to TwitterShare to FacebookShare to Pinterest
Labels: 2019, Wathan