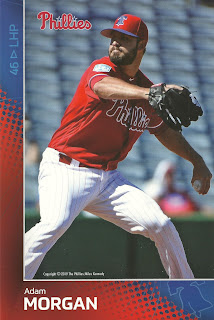 One Sentence Summary:  A three-run home run from Rhys Hoskins in the sixth was the difference in this game as the Phils defeated the Nationals, 4-2.

What It Means:  The Phillies hold a 2 1/2 game lead in the East, their largest lead of the season so far.

What Happened:  Jerad Eickhoff battled through five innings, allowing a run on three hits while striking out seven.  Jean Segura homered (2) in the first inning to get the Phillies on the board and Hoskins hit his blast (10) in the sixth off Nationals reliever Dan Jennings.  Hector Neris pitched a scoreless ninth inning to record his fifth save.

Featured Card:  Adam Morgan didn't allow a run in the seventh, marking his 16th appearance so far this season pitching shutout baseball.  He broke the Phillies record previously held by three relievers of 15 scoreless appearances to start the season.  As is the fate of most middle relievers, Morgan doesn't receive many baseball card appearances and his last mainstream baseball card can be found in the 2016 Topps set.
Posted by Jim at 12:00 PM

Email ThisBlogThis!Share to TwitterShare to FacebookShare to Pinterest
Labels: 2019, Morgan A.