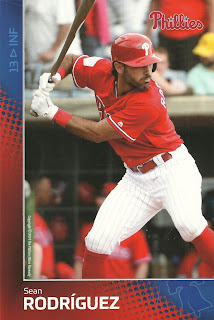 One Sentence Summary:  The Phillies' offensive slump continued and the Marlins won this game when Starlin Castro hit a two-run home run off Hector Neris in the 10th.

What It Means:  Since starting the season hot at 4-0, the Phillies are 9-12.  The loss dropped the team back into second place behind the Mets.

What Happened:  Aaron Nola showed improvement, pitching into the seventh inning and allowing a run on seven hits.  Unfortunately, the offense couldn't solve Marlins starting pitcher Caleb Smith, or the Marlins' bullpen, generating four hits and going 0 for 5 with runners in scoring position.

Featured Card:  Sean Rodriguez homered for the Phillies in the second inning.  He became the fourth starting shortstop used by the club so far in 2019, after Jean Segura and Scott Kingery both went down with injuries.  Phil Gosselin has also seen time at short.

Rodriguez, an 11-year veteran, received his first (and only?) Phillies card in the team-issued photo card set.

Transactions:  Roman Quinn injured his groin running out a bunt base hit in Wednesday night's game, landing him on the Injured List for the second time this season.  Dylan Cozens was recalled to take his place on the roster.