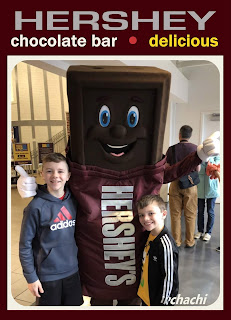 One Sentence Summary:  The Phillies fell quietly to Kyle Freeland and the Rockies in this somewhat late night game in Denver.

What It Means:  The Phillies still held a one game lead over the Mets following this loss.

What Happened:  Kyle Freeland easily handled the suddenly dormant Phillies offense, allowing two hits over his six innings of work while striking out seven.  The Phillies never held the lead in this game, and their only offensive excitement came in the seventh when J.T. Realmuto (3) hit a two-run home run.

Featured Card:  We took advantage of spring break and the holiday weekend to make the trip out to Hershey, Pennsylvania, the Sweetest Place on Earth.  Rides were rode (ridden?), chocolate was eaten and Phillies games were skipped.  We listened to the first part of this game on the ride out to Hershey and fortunately (for us) completely bypassed the Friday Night Debacle in Denver.

Transactions:  Odubel Herrera was placed on the disabled list prior to this game and Roman Quinn was activated from the Injured List.  Unfortunately, this would be the first of many injuries suffered by the team while in Denver.
Posted by Jim at 6:00 PM