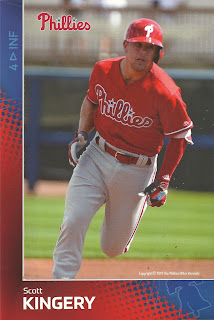 One Sentence Summary:  The Phillies scored ten times in the first inning, overpowering the Mets in this 14-3 win.

What It Means:  J.T. Realmuto and Scott Kingery had monster nights at the plate, both having three hits and five RBIs.  Per this Tweet from Meghan Montemurro, Realmuto became the fifth Phillies catcher to have three extra-base hits and five RBIs in a game, joining Carlos Ruiz (2012), Benito Santiago (1996), Andy Seminick (1949) and Butch Henline (1922).

What Happened:  Realmuto had a pair of doubles in the first inning, driving in four of his five runs.  He'd later homer (2) in the fourth.  Scott Kingery (1) and Maikel Franco (6) added a pair of three-run home runs to cap the scoring before Mets starter Steve Matz was able to retire a batter.

Featured Card:  I went with Kingery for the featured card.  Since starting the season 0 for 4, he's hitting .647 (11 for 17) with four doubles and a home run.  It's going to be tough to keep him out of the line-up at this point, especially with Cesar Hernandez hitting only .228.

Field Report:  Doug and I enjoyed this game with my brother-in-law Bill and his Dad.  Before the game, Doug once again set off on an autograph hunt, coming back with signatures from Phillies coaches Rob Thomson, Chris Young, Dusty Wathan and Paco Figueroa along with manager Gabe Kapler.  Doug also met up with his favorite green friend towards the middle of the game.

Transactions:  Having pitched two innings the previous night, Drew Anderson was optioned back to Lehigh Valley and Jerad Eickhoff was recalled to eat some innings if needed.  With Nick Pivetta continuing to labor, Eickhoff's services were very much needed and he pitched four scoreless innings, striking out six, including the final three batters of the game.  His four-inning relief appearance earned Eickhoff the first save of his career.
Posted by Jim at 7:00 PM