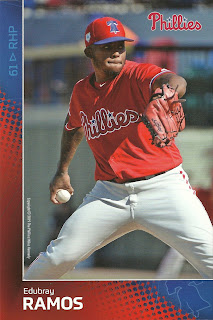 One Sentence Summary:  Despite a strong offense, Aaron Nola's struggles and the bullpen's inability to record outs late in the game led to a 10-6 defeat at the hands of the Nationals.

What It Means:  There will undoubtedly be more of this as the season progresses, but the Phillies have now given away two of their total of three losses.  This game should have resulted in a W.  Up by 6-0 after five innings, the Nationals scored 10 unanswered runs.

What Happened:  Nola went 6 1/3 innings, giving up five runs (four earned).  Edubray Ramos surrendered a solo home run to Victor Robles with two outs in the bottom of the ninth to tie the game.  Jose Alvarez plodded through a four-run 10th inning.

Maikel Franco (4) and Bryce Harper (4) had homered earlier in the game, and Jean Segura added a two-run triple.

Featured Card:  To date, Ramos has escaped any mainstream Topps releases and his only Phillies baseball cards can be found in the team-issued photo card sets dating back to 2016.

Field Report:  There were six of us in attendance on Tuesday night, and it was a gorgeous night for baseball.  Jenna and Ben hosted Jenna's parents in special Diamond Club seats in honor of her Dad's birthday.  Doug and I trekked up to Section 315 where we were greeted with the welcome sight of people outnumbering empty blue seats.  Before the game, Doug added a few more Scott Kingery autographs to his collection, but once again missing out on an elusive Harper signature.

Never try to get yourself into the Diamond Club without having been the person who first presented the tickets to enter it.

I've sat there and it's great, but one time years ago my friend's mother, sister and brother-in-law were there and had to leave early, so they gave my friend and me their tickets and wristbands to take their spot. We were upfront about not having sat there from the start of the game and asked the security guard on the first base entrance to the Club if we could take their seats and sit with his mother. He told us not only that we couldn't come into the Club, but he confiscated the Club tickets from us and told us that if we didn't immediately leave that aisle he would call for backup to have us elected from the stadium. (This was literally within the first 10 seconds of us finishing our request to him.) We returned to our seats one section away from the Diamond Club, and I promptly sent the Phillies an email suggesting that they train their security guards not to be so gestapo-like. His mother left the Club and sat with us in an empty seat because she was older and didn't want to sit by herself. Hopefully that guy's attitude has changed since that night.

To clarify, just his sister and brother-in-law had to leave early, not his mother. Also, I just remembered it was the night in 2011 that Wilson Valdez pitched and the Phils won in the 19th--so his mother, instead of sitting with friends/family in the Diamond Club for the long haul, which she had paid for, ended up sitting in still good seats but not the Club. We ended up leaving after 13 because she was older and didn't want to stay, but I couldn't help but think that she (and as a result, all of us) might have stayed had she had the chance to retreat to indoor seating in the Club.

I've sort of soured on the Diamond Club since then. I'll still accept free tickets, though!