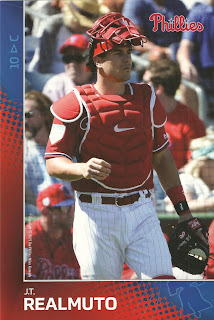 One Sentence Summary:  Capped by a monster home run from Bryce Harper, his first hit with the club, the Phillies held on to defeat to Braves, 8-6.

What It Means:  They'll go for the series sweep on ESPN's Sunday Night Baseball.

What Happened:  This offense is looking pretty good.  J.T. Realmuto had an RBI single in the 2nd and his 2-run home run (1) in the 5th gave the Phillies the lead they'd hold to for the rest of the game.  In the 4th, Odubel Herrera scored on Cesar Hernandez's triple and then Maikel Franco hit a 2-run home run (2).  Franco became the first Phillie with home runs in the first two games of the season since Ryan Howard did it in 2010.

Bryce Harper's bomb was a staggering 465 feet shot to right field, landing in the second deck.  As Matt Breen Tweeted, the Phillies have six home runs in the their first two games for the first time in franchise history.

Featured Card:  Harper's moonshot followed by his electric curtain call was probably the most memorable moment from the game, but it was Realmuto's big hits that started the scoring for the Phillies and gave them the lead.  Harper has already received his share of Phillies cards and I'm hoping Realmuto starts catching up to him.  The team's new catcher has two Phillies cards to date - his Topps Now Offseason card, and this card from the team-issued photo card set.

Field Report:  Doug attended this game with his Uncle Bill, scoring pre-game autographs from Scott Kingery and MLB Network's Ken Rosenthal.  He was three kids away from getting his first Harper autograph when Harper left to begin his pre-game routine.  So close!