One Sentence Summary:  Jerad Eickhoff made his first start in over a year, but the Braves ruined his return in this 10-2 loss.

What It Means:  Eickhoff was emotional following the game, thanking the Phillies and GM Matt Klentak for allowing him the opportunity to start one of the final games of the season.  A healthy Eickhoff would be huge for the Phillies starting pitching rotation in 2019.

What Happened:  At one point, Eickhoff struck out 7 straight Braves and he exited after 3 1/3 inning having struck out a career high 8.  Luis Garcia won the nightly bullpen award of most runs allowed, giving up three runs in a 1/3 of an inning and seeing his ERA jump to 6.07 for the season.  Rhys Hoskins hit a 9th inning home run, his 34th and final of the season.

Featured Cards/Field Report:  My family attended this game together, our final night game of the 2018 season.  I'll admit that we didn't make it through all nine innings.

Doug had yet another successful autograph haul, netting signatures from Rhys Hoskins, Scott Kingery and Roman Quinn* on their newly released Topps Now Player's Weekend cards.  He and a few other ambitious young fans enjoyed themselves as players and coaches filed into the dugout prior to the game.

*The Topps quality control department continues to fail as the Topps Now Player's Weekend card for Odubel Herrera, featuring his Torrito nickname, shows a picture of fellow outfielder Roman Quinn.  If nothing else, I'm using Topps' short-comings as a lesson to my sons in what happens when someone doesn't double check their work or when someone flat out doesn't care about his/her job. 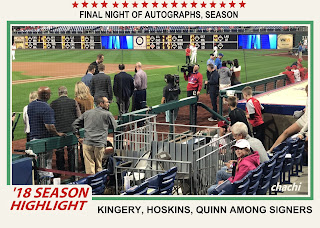