One Sentence Summary:  It all came together for one night as the offense exploded and Zach Eflin delivered a quality start in this 14-2 whomping of the Marlins.

What It Means:  With the postseason all but out of reach, perhaps the team has relaxed a little.  I'm still a little bitter and frustrated, but Doug and I spent a few innings of this game going through our proposed 2019 line-up, which includes both Manny Machado AND Bryce Harper.

What Happened:  Aaron Altherr had a big night, hitting two home runs (8), driving in five runs and executing a great slide at home to score from second on a fielder's choice ground-out that Roman Quinn beat out in the 4th.  Rhys Hoskins (31), Quinn (2) and Mitch Walding (1) also homered with Walding's being the first hit of his career.  Carlos Santana went 3 for 3 and scored three runs while Jose Bautista added two doubles.  Hoskins started his third game of the season back at first base, which could be a preview of things to come next season.

Featured Cards/Field Report:  Doug and I attended this game with a few simple goals - obtain an autograph or two for Doug's collection and enjoy some ballpark food.  We accomplished those two goals and also witnessed one of the more enjoyable Phillies games in recent memory.

Doug stationed himself at the corner of the Phillies dugout and had the most successful autograph gathering night of the season.  Hoskins, Scott Kingery, Quinn, Altherr, manager Gabe Kapler and coach Rick Kranitz all signed for him, some of them signing multiple items for his collection.  Doug was happy to help a few of the younger autograph seekers call over players.  I found him this morning admiring his new treasures and he allowed me to photograph and scan them for this post. 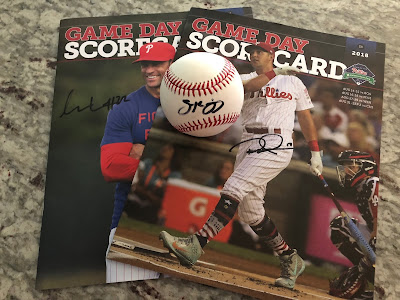 I'd call that a great night at the ballpark!