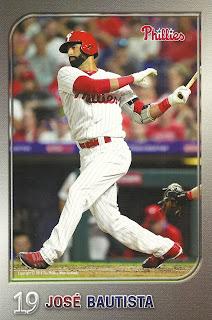 One Sentence Summary:  The 2018 Phillies season unofficially ended for me when the Nationals came from behind to win in extra innings, 7-6.

What It Means:  This loss marked the moment I crossed the threshold from "They still have a chance," to "I can't believe they completely fell apart and blew it."  Granted, the Phillies weren't supposed to compete for a playoff spot this year and the so-called experts, along with the team's own front office, projected them to truly be ready for contention beginning with the 2019 season.

So it was a bit of a pleasant shock when the Phillies took over first place very briefly on May 26th only to lose it the next day.  They kept playing sloppy baseball, they kept getting suspect relief performance and they kept coming up empty when a big hit was needed, but somehow they were back in first place on July 6th.  They were 15 games over .500 on August 7th having held onto the top spot in the division for a month when the bottom dropped out.

The little mistakes became big mistakes.  The offense all but evaporated and the occasional bright spots came from either a pitching performance from Aaron Nola or another home run from Rhys Hoskins.  Since August 5th, the Phillies have gone 11-23 and they're 0-10-1 in their 11 series played since then.  (Meghan Montemurro Tweet.)  The July ascent was unexpected and all too short.  The August/September collapse was quick and has gone on way too long.

What Happened:  The Phillies exploded for five runs in the 5th thanks to four doubles and three singles.  It was the kind of rare outburst the Phillies had been striving towards and hoping for all season.  But in the end, it meant nothing.  The Nationals scored three in the 9th to tie the score, with the tying run coming on a bases-loaded walk from Luis Garcia.  Juan Soto homered off Yacksel Rios in the 10th to send the Nationals to the double header sweep.

Featured Card:  I got an e-mail from fellow collector Rick during the first game alerting me to the presence of new photo cards to be found in the team-issued set.  I've updated the set's listing here with the 8 new cards.

This is Jose Bautista's first (and to date only) Phillies baseball card, found within these updated sets.  Bautista homered in the 8th inning, making him the first player in baseball history to hit a home run with three different teams in the same division in the same season.  (Jayson Stark Tweet.)

Field Report:  It was empty and at one point my wife texted me that I should start screaming to see if she could hear me on TV.

Email ThisBlogThis!Share to TwitterShare to FacebookShare to Pinterest
Labels: 2018, Bautista