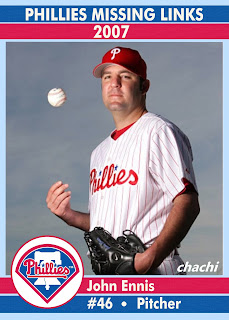 The Phillies signed right-handed pitcher John Ennis in November 2006 and invited him to spring training the following February.  In need of a fresh bullpen arm in late August, the surprising Phillies recalled Ennis from the Triple-A Ottawa Lynx, where he had served well as both a relief and starting pitcher.  He made his Phillies debut on August 26th, pitching the final 3 innings of a 14-2 blow-out win against the Padres, earning a save in the process.  Two days later he was designated for assignment to make run for Adam Eaton who was returning from the disabled list.

Ennis passed through waivers, made one more appearance with the Lynx and was recalled following the September 1st roster expansion.  He'd appear in two more games for the Phillies that September, starting the September 8th contest against the Marlins, tossing four innings and allowing a home run.  Ennis returned as a spring training non-roster invitee in 2008, but those two games the prior September were to be his last in the majors.  After a brief stop in Korea, he came back to the Phillies and pitched for Lehigh Valley in 2009 and 2010 (1 game each year) and Reading in 2010 (18 games).

I think I have a spring training or BP jersey of this Ennis; I wish it was of the other one. Or maybe I don't have it--it was about $35 on eBay several years ago and I can't remember now if I pulled the trigger. It obviously doesn't get much use. I picked it solely because of the last name.