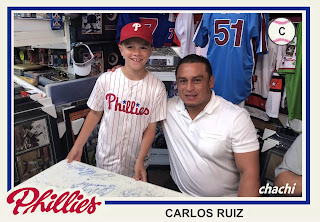 We had the pleasure of briefly meeting former Phillies catcher Carlos Ruiz this afternoon at Carl's Cards & Collectibles in Havertown.  Chooch is in town this weekend for the Phillies Alumni celebration, and Doug was anxious to add his autograph to his collection.  Doug had him sign one half of the recent Pride of the Phillies print featuring Ruiz with Ryan Howard, and I decided to get an autograph on Ruiz's 2008 Phillies team issued photo card.

Chooch asked Doug if he played baseball and what position he played.  It was great to meet the catcher who was behind the plate for the final out of the 2008 World Series and who caught four no-hitters throughout his career.

The Phillies Room is going back on auto-pilot for a little bit as we continue to rest our arms in preparation of an important stretch run and deep postseason.
Posted by Jim at 7:00 PM