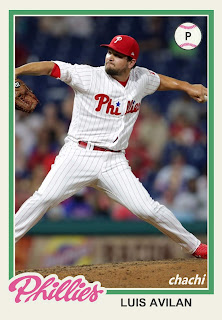 First Mention on The Phillies Room:  August 23, 2018 - Earlier in the day, the Phillies announced another trade, sending Double-A pitcher Felix Paulino to the White Sox for lefty reliever Luis Avilan.  Pitching prospect Jose Taveras was designated for assignment to make room on the 40-man roster for Avilan.  In 58 games this season with the White Sox, Avilan has a 3.86 ERA and a 14 walks to 46 strikeouts over 39 2/3 innings pitched.

Sharing the fate of most middle relievers, Avilan's baseball card appearances have been scarce in spite of appearing in almost 400 games the past 7 seasons.  His most recent mainstream card is from the 2016 Topps set, picturing Avilan with the Dodgers.