One Sentence Summary:  The offense overcame a bad start from Jake Arrieta, as the Phillies went on to a rout of the Padres, 11-5.

What It Means:  The Braves also won and the Phillies maintained a half-game lead in the division.

What Happened:  Arrieta couldn't escape the fourth inning, and his final line wasn't pretty - 3 2/3 innings, 6 hits, 3 walks, 5 runs.  He was also charged with an error and uncorked a wild pitch.  The Phillies enjoyed a six-run 2nd inning capped by a three-run home run (15) from Carlos Santana.  They'd add four more runs in the 8th with the big hit being a two-run double from Cesar Hernandez.

Freddy Galvis returned to Philly for the first time, going 3 for 4 with a pair of RBIs.  Galvis received a warm reception throughout the game.

Featured Card:  This is the newest Santana card in my collection from Topps' Stadium Club release.

Transaction:  Enyel De Los Santos was optioned to the IronPigs and Mitch Walding was recalled, giving the Phillies another bat off the bench until a fifth starter is needed again.

Field Report:  Doug and I attended this game, marking the third Padres game we've witnessed in the past 3 weeks.  It was a beautiful night for baseball.  Before the game, Doug added three signatures to one of his baseballs from Jerad Eickhoff, Pedro Florimon and coach Pedro Guerrero, Jr. 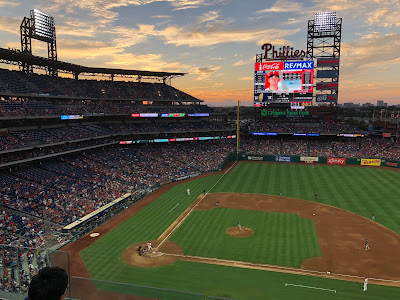