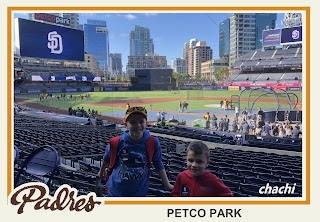 One Sentence Summary:  The bullpen managed to hold back the Nationals after Vince Velasquez was forced from the game with an injury in this 3-2 win.

What It Means:  Velasquez was drilled in the right arm with a line drive off the bat of Adam Eaton, picked up the ball with his left hand and threw to first to retire Eaton.  He would land on the DL with a deep bruise.

What Happened:  Odubel Herrera broke out of an 0 for 22 slump with a solo home run (14) in the 3rd off old friend Jeremy Hellickson.  Jorge Alfaro and Aaron Altherr added RBI doubles.  Victor Arano pitched two scoreless innings for the win.

Transaction:  Following his latest melt-down on Friday night (1 innings, 3 home runs, 5 runs), Hector Neris was optioned back down to the IronPigs and Mark Leiter, Jr. was recalled.

Featured Card/Field Report:  We arrived in San Diego on Saturday afternoon to start our whirlwind, 10-day, 3 ballpark, 3 National Park road trip odyssey.  It may be a bit of a spoiler alert, but of the three ballparks we visited, Petco Park won the award as our favorite.  It probably didn't hurt that the weather was gorgeous during our visit and we needed sweatshirts for both games we attended.

We enjoyed our tour of the park prior to the start of the Padres game against the Pirates, although we didn't get to go down on the field as the team was taking early batting practice.  The Padres prevailed in the game, 4-3, thanks in part to 3 RBIs from Wil Myers.
Posted by Jim at 7:00 AM