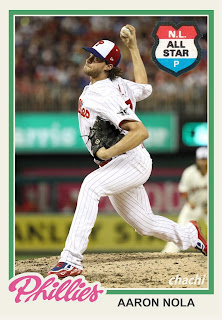 One Sentence Summary:  Astros teammates Alex Bregman and George Springer hit back-to-back home runs off the Dodgers' Ross Stripling in the 10th inning to give the A.L. and 8-6 win, and their sixth win in a row.

What It Means:  I wrote this sentence in last year's All-Star Game summary post, and it applies again this year:  "Don't get me wrong, I still love the All-Star Game, but . . . Fox's ridiculous in-game stunts left me a little jaded . . . Players were mic'd up and interviewed in the field during live at-bats. I wanted to watch a baseball game."  I think I'm getting old.

My favorite thing about this year's All-Star Game is that it's the first Mid-Summer Classic that both my two sons watched with me.  They watched the pre-game introductions with Ben making it through 5 innings and Doug lasting a few innings longer.  I'm getting to that point in my fandom where Doug knows all the players better than I do and I'll admit there were a few American League players I had never heard of before this game.

What Happened:  The two teams set an All-Star Game record with 10 total home runs.  Joining Bregman and Springer with long balls were Aaron Judge, Mike Trout, Willson Contreras, Trevor Story, Jean Seguera, Christian Yelich, Scooter Gennett and Joey Votto.  Gennett's was responsible for sending the game into extra innings as his tied the game at five with one out in the bottom of the 9th.

We also learned during the game that slugger Manny Machado would be heading from the Orioles to the Dodgers and our entire household collectively booed.

Featured Card:  The Phillies were short-changed and sent only one All-Star to Washington.  Aaron Nola entered the game in the 5th inning, relieving Mike Foltynewicz.  He struck out Salvador Perez and Mookie Betts swinging before allowing a single to center from Jose Altuve.  Nola then induced a pop-out to first from his future teammate Trout to end the scoreless inning.

I hope you’re right about that future teammate line!

You and me both!