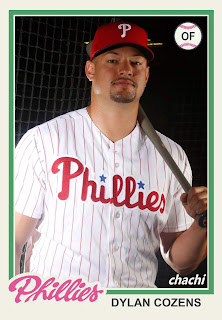 First Mention on The Phillies Room:  August 24, 2014 - 2nd Annual Lakewood BlueClaws Outing . . . The BlueClaws are the Phillies Low A team playing in the South Atlantic League.  We were once again able to get first row tickets right behind the BlueClaws bullpen, and my oldest son Doug spent the bulk of the hour leading up to the game tracking down autographs.

He got autographs from BlueClaws home run leader (and Phillies top prospect) Dylan Cozens along with catcher Willians Astudillo.  He also got autographs from former big leaguers Gregg Legg and Les Lancaster, both of whom were ejected in this game for arguing balls and strikes.

Our youngest son Ben was the recipient of a baseball when BlueClaws starting pitcher Ranfi Casimiro finished his pre-game warm-up, walked over to Ben and handed him his ball.  I wanted to include Casimiro's card in this post because his generosity was such an awesome gesture.  There were a ton of kids seeking autographs (and demanding baseballs) in our section and Casimiro made it a point to walk over to the youngest, quietest kid and hand him a ball.  Ben went to bed clutching both the baseball and his new BlueClaws giant foam finger.

It was a great night of baseball along with a fun night for our family, and we'll be back for another game (or two) in 2015.