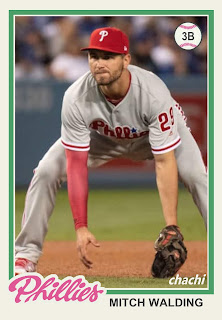 First Mention on The Phillies Room:  January 4, 2018 - Phillies Announce First 10 Non-Roster Invitees . . . The Phillies got a late start this offseason in announcing their first batch of non-roster invitees, as last year's first group of non-roster invitees was announced in mid-December.  Nevertheless, this brings us another step closer to spring training!  Here's a look at the first 10 players who will suit up in spring training wearing numbers in the 60s, 70s and 80s.

It would have been nice to have a hard copy of this Chachi card at the ALS Phestival last night!