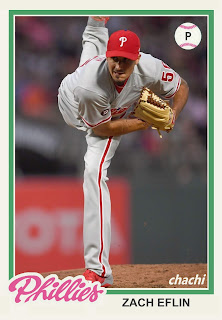 First Mention on The Phillies Room:  December 19, 2014 - Jimmy Rollins Topps Gallery . . . There has been a deal.  After much consternation and hand-wringing, the Phillies have officially traded long-time shortstop Jimmy Rollins to the Los Angeles Dodgers for pitching prospects Zach Eflin and Tom Windle.  The deal had to wait until the Dodgers completed their Matt Kemp trade with the Padres, in which one of the players received from San Diego was Eflin.

I'm still processing all of this, and trying to figure out exactly how I want to pay tribute to Rollins and his time in Philadelphia.

Back in the 1980s, when the Phillies were paying tribute to a retired star, they'd issue a poster or a print of that star framed by his Topps baseball cards throughout his career.  They did this for Tug McGraw, Mike Schmidt and Richie Ashburn.  I'd like to see them do something similar for Rollins when the day comes for him to announce his retirement.  In the meantime, here's a gallery of Rollins' base Topps cards as my small tribute to the franchise's all-time hits leader and the greatest shortstop in team history.