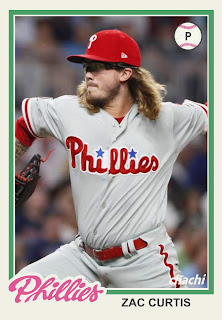 Get this man a baseball card!

First Mention on The Phillies Room:  September 13, 2017 - On the off day Monday, the Phillies claimed lefty reliever Zac Curtis off waivers from the Mariners and placed Jesen Therrien on the 60-day disabled list. Therrien is likely headed for elbow surgery.  Curtis appeared in 21 games for the Diamondbacks in 2016 and three games for the Mariners this season.  His baseball card appearances have been limited to minor league team sets, Panini issues and one multi-player card in the 2016 Topps Heritage Minor League set.