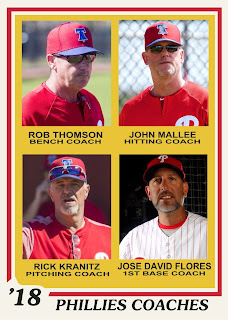 First Mention on The Phillies Room:  December 15, 2017 - Phillies Winter Meetings Recap . . . Finally, Gabe Kapler's coaching staff was completed with the addition of Jose Flores as the first base, infield and baserunning coach.  Flores had been the Cubs' minor league infield coordinator for the past five seasons.  I'm now fairly sure this is not the same Jose Flores who played in the Phillies system between 1994 and 1999.  That Jose Flores was Jose Carlos Flores and he was traded to the Mariners in 1999 for Domingo Cedeno.  The new Phillies coach is Jose David Flores.

I love the coaches card in the style of a 1978 rookie card.

You are going to need 2 of those, or 2.5 if you also do them for the bullpen catchers. That 2-player card should be an interesting design challenge!