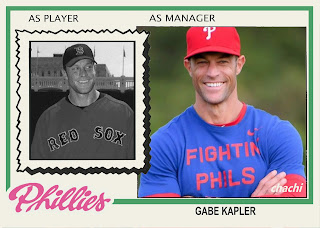 First Mention on The Phillies Room:  November 3, 2017 - Kapler Named New Phillies Manager . . . On Thursday, following the conclusion of the 2017 World Series the night before, the Phillies introduced Gabe Kapler as the 54th manager in franchise history.  Kapler, along with GM Matt Klentak, will now get to work shaping the Phillies roster for 2018 and hiring a coaching staff.  He's the first manager for the Phillies to have no prior connection to the team since Terry Francona took over in 1997.

I was disappointed when Pete Mackanin was let go and I was hoping Dusty Wathan would be the team's new manager going into the 2018 season.  Wathan knows the younger players, having managed in the Phillies minor league system (and won) since 2008.  Kapler is an interesting choice, and watching his press conference on Thursday afternoon he didn't do a whole lot to convince me that he's the right person for the job.  To be fair, I remember feeling the same way prior to the 2005 season when Charlie Manuel was introduced by then GM Ed Wade as the team's next manager.

From a baseball card perspective, Kapler first started appearing on mainstream baseball cards in 1998 with the Tigers.  Oddly enough, and I'm sure others have noticed this before I did, he appeared on two different multi-player Prospects cards within the 1999 Topps flagship set.  His final card as an active player shows up in the 2010 Topps Update set.