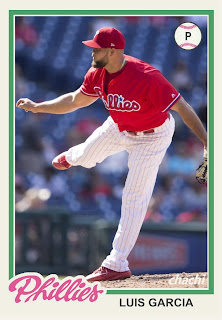 Second Mention on The Phillies Room:  July 27, 2013 - I wanted to acknowledge the Major League debut of Steve Susdorf in Thursday night's game.  Susdorf got the call when Domonic Brown was placed on the relatively new seven-day disabled list, available specifically for players with concussion-like symptoms.

Susdorf pinch-hit for Kendrick in the seventh inning and promptly grounded into an inning-ending double play.  Welcome to the team, Steve - you'll fit right in!

But seriously folks . . . It's nice to see Susdorf get his shot after parts of six seasons in the minors.  Drafted by the Phillies in 2008, Susdorf was hitting .335 in Lehigh Valley this season.  He hasn't appeared on any mainstream baseball cards yet in his career, but I have five minor league cards of his in my collection.  Unless Topps decides to include him a set, he'll mostly likely join Ezequiel Carrera, John McDonald and Luis Garcia as members of the 2013 Phillies without a Phillies baseball card.