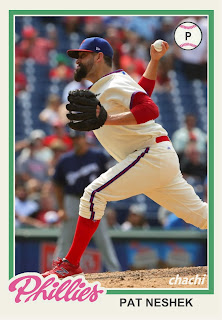 First Mention on The Phillies Room:  November 5, 2016 - Here's the First Pat Neshek (Unofficial) Phillies Card . . . I get inordinately excited whenever the Phillies make offseason player moves, and the first acquisition of the 2016-2017 offseason was announced yesterday.  The Phillies acquired reliever, and fellow baseball card collector, Pat Neshek from the Houston Astros for a player to be named later or cash considerations.

An All-Star in 2014, Neshek has pitched for 10 seasons with the Twins, Padres, Athletics, Cardinals and Astros.  His most recent mainstream baseball cards can be found within the 2016 Topps flagship and 2016 Topps Heritage sets.  Neshek will have to find a new number for 2017, as the #37 he wore with the Astros is currently occupied by Odubel Herrera.

He's the first card in the 2017 Chachi New Additions set, and I've added him to the Phillies Virtual Wall, which now stands at 32 players.