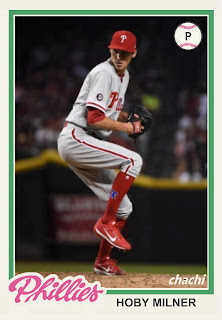 First Mention on The Phillies Room:  March 16, 2016 - . . . I'm not sure what I find this so intriguing, but the Phillies have updated their online roster page with the names and numbers of those minor leaguers who get invited to accompany the big team on any given day.  Here's the updated list, which includes some additions from last week's list:

Second Mention on The Phillies Room:  December 9, 2016 - Four Players Depart the Phillies Organization:  Finally, the Phillies lost minor league pitcher Hoby Milner to the Indians in the Rule 5 draft on Thursday morning. Milner has been with the organization since 2012 and he split last season between Double-A and Triple-A.  His likely final Phillies-related baseball card was released a few weeks ago in the Reading Fightin Phils Holiday set.