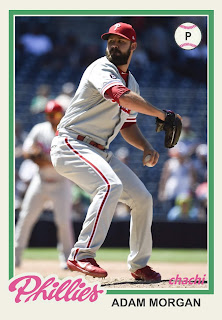 First Mention on The Phillies Room:  January 29, 2013 - 2013 Non-Roster Invitees - 7 More Added . . . A sure sign that we're getting closer to pitchers and catchers reporting is that the official number of non-roster invitees now stands at 19.  Last week, the Phillies added five of their top prospects to the list of players who will wear numbers in the 60s and 70s while hoping to impress Charlie Manuel and the rest of the coaching staff.  They also added outfielder Joe Mather, who spent 2012 with the Cubs, and infielder Yuniesky Betancourt, who had a rough year last year with the Royals before earning his release in August.

For me, the most intriguing names on the list are Cody Asche and Tommy Joseph.  Asche is the heir apparent at third base for the Phillies and if all goes according to plan, he'll be manning the hot corner in 2014.  With Clearwater and Reading last season, he hit .324 with 12 home runs and 72 RBIs. Joseph was acquired from the Giants in the Hunter Pence deal and MLB.com named him the organization's top position player.