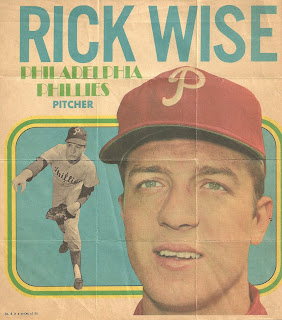 One Sentence Summary:  This game quickly got out of hand for the Phillies and Jake Arrieta, as the Cardinals won a laugher, 12-4.

What It Means:  The game started after a 95 minute delay and Arrieta clearly didn't have his best stuff.  He was pulled after three innings having allowed four runs (two earned) on five hits.

What Happened:  Drew Hutchison (3 innings, 5 runs) and Yacksel Rios (1 inning, 3 runs) didn't fare much better against the Cardinals offense and Pedro Florimon found himself on the pitching mound for the second time this season.  Florimon pitched a perfect eighth inning, lowering his season ERA to 9.00.

Email ThisBlogThis!Share to TwitterShare to FacebookShare to Pinterest
Labels: 1970, Wise